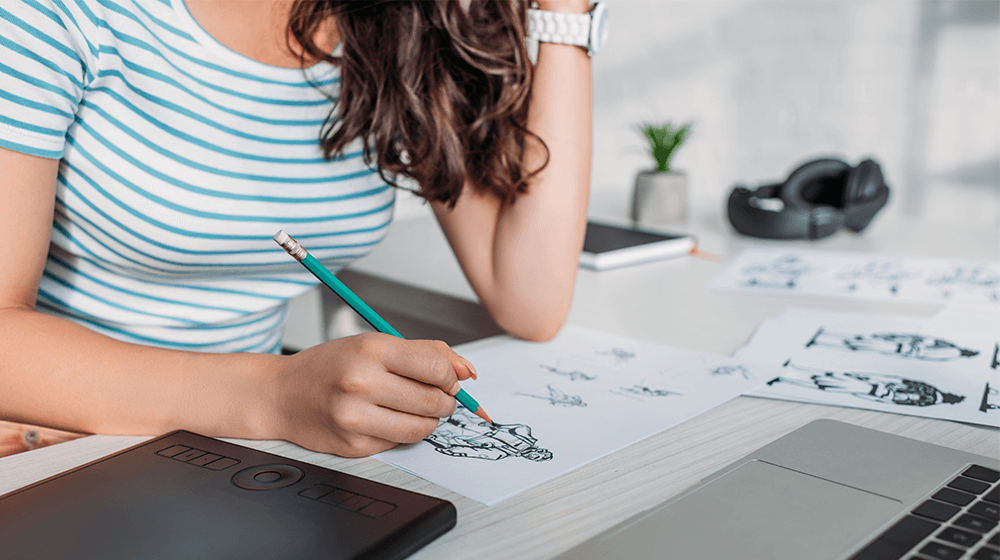 How good was it for skilled freelancers in 2019 when it comes to earnings in the top U.S. cities? According to the Fiverr 2020 Annual Freelance Economic Impact Report, they brought in $150 billion in revenue in 2019.

This report comes as COVID-19 dramatically increased the number of remote workers in the U.S., making remote work the norm for tens of millions of Americans. And this is a very important point to consider moving forward after the pandemic. A point Micha Kaufman, CEO and Cofounder of Fiverr, addresses in the press release.

Kaufman says employers and employees are having to reexamine the many different aspects of the modern workplace. This includes the technology to make this type of work possible, which freelancers have been doing.

But moving forward, Kaufman says, “My belief is that, coming out of all this, we’ll begin to see a digital transformation in the labor market, meaning a shift to more digital, independent work.” And more and more those with high caliber skills are becoming freelancers across the country and the world.

As in last year’s report New York City keeps its number one position in terms of revenue and population. This year NYC freelancers managed to generate $26.094 billion compared to last year’s $25.32 billion.

Same as last year, Los Angeles is second with $19.97 billion and Chicago jumped up two spots to capture the third spot with $6.83 billion. Miami and Washington D.C. complete the top five with $8.37 billion and $8.12 billion respectively.

In terms of growth, from 2012-2017 Nashville and Austin grew the fastest in population and revenue than all other cities. While Nashville grew its skilled freelancers by 26%, Austin was one percentage higher with 27%. Revenue wise Nashville exploded with a 37% growth compared to 29% for Austin.

In this year’s report Austin managed $2.85 billion while Nashville generated $2.55 billion in revenue. 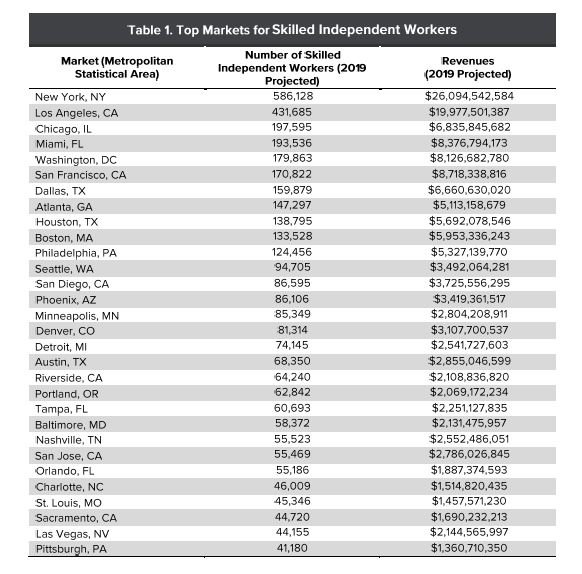 Earning on a Person Pay Basis

It goes without saying, cities known for their high cost of living have higher earnings. But when you take into account the cost of living, Las Vegas and Nashville workers are faring much better. For example, workers in NYC are making an average of $44,520. On the other hand, Nashville workers are earning $45,971 and in Las Vegas it goes up to $48,569.

Considering how much it costs to live in NYC, the money freelancers in Las Vegas and Nashville make will go much further. Overall, the average across the top 30 cities comes out to $39,688.

The COVID-19 outbreak is weighing heavy on all businesses and their employees. And it is no different for these freelancers. The survey says more than 6 in 10 or 62% are more fearful than hopeful about the future of independent work because of the pandemic. However, 59% also say they expect to make more or about the same amount in 2020 as they did in 2019.

Speaking of earnings, the freelancers say there are drawbacks working this way. This includes, irregular income (72%), lack of access to benefits (61%) and having to provide their own equipment and tools (35%). But even with these drawbacks, freelancers are satisfied with their work.

Seven in ten freelancers across the U.S. are satisfied with their work. The benefits of having flexibility, being able to work from home or anywhere else for that matter, the dynamic nature of their work is all pluses. As to the demographic of the workers, both men and women are finding success as skilled freelancers. In the U.S. women makeup 52% of the workforce while men make up 47%.

When it comes to finding clients, freelancers use different sources but word of mouth is number one at 67%. Social media (23%), and online marketplaces such as Fiverr (18%) make up some of the other sources they use. 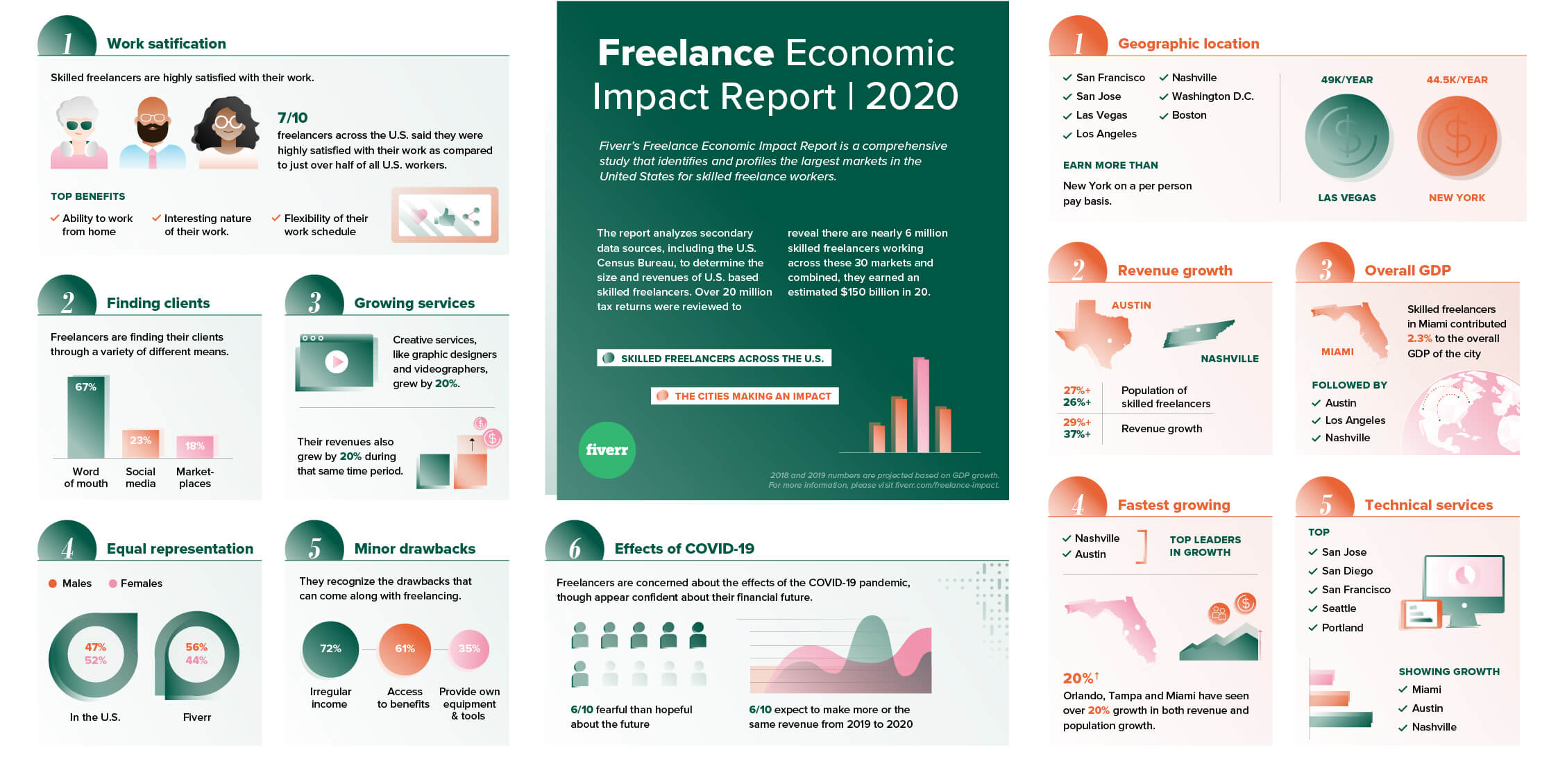 The Data for the Report

The report is a collaboration between Fiverr and Rockbridge Associates, a market research firm specializing in the services and technology sectors. Rockbridge analyzed secondary data sources including the U.S. Census Bureau, to determine the size and revenues of U.S.-based skilled freelancers.

After reviewing 20 million tax returns, a total of 6 million skilled freelancers working in creative, technical, or professional positions in the U.S. were identified. Furthermore, Rockbridge and Fiverr conducted surveys of more than 1,500 skilled independent workers between January 2019 and January 2020 as well as March 18 – 30, 2020.

This article, “Skilled Freelancers in the Top U.S. Cities Brought In $150 Billion in Earnings in 2019” was first published on Small Business Trends