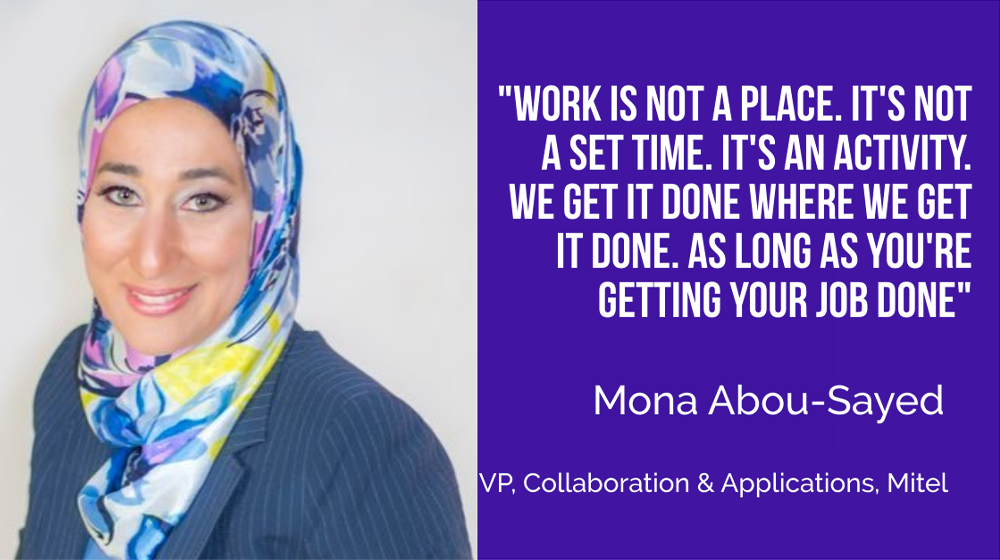 Covid-19 forced a lot of folks who were used to going into an office every day to work from home.

And, while many of those folks will eventually go back into an office to work, a significant number of them won’t.

Even those that do go back will return to a completely different environment and workplace experience than they left.  So what does that mean for small business going forward as we try to survive during the pandemic and position ourselves for success once the crisis is behind us?

That was the topic of a LinkedIn Live conversation I had earlier this week with friend and small business analyst Laurie McCabe, and Mona Abou-Sayed,  VP of Collaboration & Applications for Mitel; a global market leader in business communications.

The discussion touched on a number ways the pandemic is fundamentally changing people, and how those behavioral changes is/will change business operations and customer engagement.

Interview with Mona Abou-Sayed of Mitel

Below is an edited transcript of a portion of the conversation.  Click on the embedded SoundCloud player to hear the full discussion.

Small Business Trends: How are small businesses doing in response to the pandemic?

Mona Abou-Sayed: What’s happening right now is it’s a key event in our lifetime. There’s going to be Before COVID and After COVID, right? And the ones that are going to survive are the ones that are going to be able to adapt to how business is changing, how people are changing. And then at the same time you have all these cultural implications. I’ve seen a lot of businesses already transforming, especially small businesses, really transforming how they’re doing business.

I have a key friend, a mentor, that is totally transforming her business. And when are we going to start seeing change? I think we saw a change immediately. I think though, as we go into the next part of this is companies are going through different phases in how they’re reacting and learning and adapting. So, that’s where we’re going to start to see some real change.

Initially companies started in the phase of reaction, right? They are like, “Okay, now what do we do?” You had some companies, like you said, that were already prepared. So they immediately increased their licensing, increased their exposure to more employees in the organization. But others had nothing in place to handle the change, and so there was a lot of emotions, a lot of change for a lot of people.

And then as the big rush was passed, people were mitigating, learning to figure out how am I going to work in this new normal or next normal? How am I going to manage having a child over here e-learning right next to me using up the bandwidth that I need to have a meeting? Just getting this whole work life blend. And that’s when you started to see, I think, a lot of stress in people. Right? The workday has suddenly extended and encroached upon lunchtime and breakfast time and even dinner. There doesn’t seem to be an end to the day.

And then we’re kind of moving into this reassurance phase where we’re realizing, you know what? We’re just going to have to learn to adapt. And this is how we want to be able to move forward in business. And this is how we need to support our employees from a reassurance standpoint. We’re planning now how are we going to survive in the future. And then finally, we’re going to be in this recovery period over time. But I think we’re somewhere in between mitigation and reassurance, depending on where you were in the journey already.

Laurie McCabe: Mona, I think it really captures the way a lot of people think about this and are moving through this. We’re already seeing so many companies, and not just like the Googles and Facebooks or whatever, saying, “Okay, we’re going to extend work at home for a significant amount of time.” I mean, this local bank that I mentioned before, a lot of their employees, they’ve decided, they’ve learned, hey, they can do their jobs at home. And so we’re planning right now. I think they’re kind of in that reassurance phase, you mentioned. They’re planning how do we maybe rethink some of our applications, security, infrastructure kinds of things so that we can really do this better? Not just in that react kind of way we started with.

Mona Abou-Sayed: Absolutely. And I’m finding so many more creative solutions just from my social circle. Right? I have someone in my social circle that has a newborn child and they were going to be heading back into the office and daycare. And all of a sudden they found themselves trapped at home, both working full-time with a newborn baby and no childcare. What they told me exactly is, “Well, there’s no such thing as a workday anymore.” We have work that needs to get done, right? It’s not a place, it’s not a time. Work is an activity. We get it done when we get it done. And as long as you’re getting your job done… so it’s a complete mindset change. This time card concept and this where are you? Are you actually in the office? It’s totally changed. So it’s not even just work from home, it’s work from anywhere. It’s work from where you need to be.

Small Business Trends: Which one of these areas do you think small businesses are going to be most challenged by?

Mona Abou-Sayed: I guess it really depends on what kind of small business you’re talking about. So I would say depending on what kind of market you’re in, it would be different. What do you think, Laurie?

Laurie McCabe: Yeah, I agree. Obviously, if you’re a business that relies on a physical location and physical services, I’m thinking of the hairdressers and doctors and dentists and things like that. You’re going to have to figure out what goes on online and virtual well, and what doesn’t. Obviously if I have a skin rash, I can show that to my dermatologist. But if I’m having a heart attack, I really better call 911, get that ambulance and shoot on over to the hospital.

I personally think that in a lot of businesses, the biggest challenge is going to be in the culture like you were saying, Mona. It’s not about how many hours I see you sitting at a desk now, right? It’s got to be about really defining what are the outcomes for this employee and what can we do to help this employee achieve these outcomes, that all add up to what the business goals are. I think in some businesses that comes naturally, but in others, it’s hard. It’s hard to trust, and trust is really going to be at the heart of all this. Trust and really good objectives and defined roles and goals.

Mona Abou-Sayed: Yeah, yeah, absolutely. What I’ve really observed is the human connection and bringing back the humanity in what we’re doing. Humanizing work again, right? I think we kind of turned into robots at some point in time and bringing it back to reality and bringing your whole self to work. But essentially now, as a leader in a business, you’ve got to start thinking about your employee and their whole self, right?

Mona Abou-Sayed: In the past where you may have been in the office, or you had the handful of remote workers, they were kind of accustomed to being on their own while not necessarily always feeling as engaged as they could be because the majority were in the office, they were used to that. What I really like about what we’ve been through is that we’ve really evened the playing field. Now everybody’s working from home and now we all know what it feels like for those remote workers. So I think in the future, we’re going to see a lot more empathy towards that type of environment, those people that are working alone. So, video conference calls are key and critical to that.

And then not just making it where it’s just a video call, I’ve even observed over the last several weeks. And when we get into a call now there’s a little bit more of this human connection at the beginning. And even bringing some fun to it, whether it’s playing a game or having a meeting theme and things like that.

Small Business Trends: How do you make sure that you get the right mix of skill sets and kind of cultural fit going forward?

Mona Abou-Sayed: I think much like we did interviews in the past where you had them meet a variety of people one-on-one and in a team setting, in a group setting, I think it’s going to become imperative to continue with video interviews and see how they are able to react.

I think we’re going to have to be a lot more creative about how we assess an individual’s capability to solve problems without having that interaction directly and be in this kind of environment. Several companies do use like personality and assessment tests and things like that. I think that measures some things, but I really want to see how are you going to react when you’re on camera and you’re talking to people that are not in the room with you? What is your body language? That’s important.

Laurie McCabe: I think also it’s important, obviously there are a lot of people that are shy or introverted and I’ve had people say to me, “I don’t know how you can do that. I don’t know how you can go on these videos or go talk in front of a group of people.” Some of us are very comfortable, others aren’t. And so there probably needs to be some kind of help so that the people that they’re just shy or more introverted, but they’re really good at doing their job, other than being on a Zoom or wherever kind of online meeting, they can do that comfortably and do it well and let their skillset shine through.

Mona Abou-Sayed: A key piece of that is once you do bring the employees in it really starts from the top. It’s a culture that starts from the top. If you are in meetings where leaders are not turning their video on or they’re scheduling, you’re never going to get that adoption, you’re never going to get that connection. But I believe there’s a balance to be had. I believe in the last few weeks, it feels like I’ve been on video calls from 7:00 AM to sometimes 6:00 and 7:00 PM. The video fatigue is real. And so it’s okay and acceptable. I don’t think we need to shame people when they have to turn their video off. That’s okay.

Mona Abou-Sayed: But I think we need to encourage it by just humanizing it. And one thing that I’ve actually noticed is I get in calls sometimes and somebody’s kind of frantic and they’re like, “Well, my baby’s crying.” Pick up the baby. It’s okay.

Mona Abou-Sayed: We’re here as humans, we bring our whole self to work. You build so much better collaboration as a team when you can identify with people and those connection points are real.