In a knowledge-based economy, companies upgrade their “capital” not by overhauling outdated machinery but by upskilling their workforce. That’s because human capital is increasingly the most important asset companies possess. And while humans aren’t as static as machinery, they still need to be retooled and upgraded. 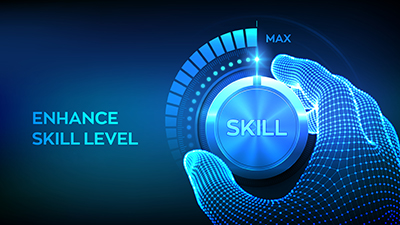 Before the COVID-19 pandemic hit, Nationwide announced it would be spending $160 million during the next 5 years to offer all of its 28,000 U.S. employees digital literacy and “future capabilities” training.

The company listed automation and other tech advancements as key factors in launching the new program, which is aimed at preparing its workforce for the increasingly tech-heavy future economy.

While AI and automation certainly can and will replace some jobs, many overlook the fact that technology also creates new opportunities. Technology can help eliminate some of the more tedious tasks traditionally performed by humans, but advanced technologies still need humans to develop, maintain, improve, and operate them.

In a recent interview with Built In, Sean Chou, CEO of AI start-up Catalytic, argues that successfully leveraging advanced AI, automation, and other technologies requires a lot of skilled workers. And, Chou adds, the more advanced the technology becomes, the more people will be needed.

Chou explains, “So you move from worrying about the impact of high technology to actually helping to create the technology. When you look at AI, there’s this nonstop need for training, for data, for maintenance, for taking care of all the exceptions that are happening. How do we monitor AI? How do we train it? How do we make sure that AI’s not running amok? Those are all going to become new jobs.”

Considering the Jobs of the Future

Nationwide, Amazon, and other big companies recognize the advantages new technological advancements in AI and automation can provide. They also know that current workforces are generally unprepared to successfully utilize those advancements. Upskilling the workforce to more effectively leverage the boons of new technology can be an important benefit for employees and employers alike.

The post Upskilling Workers for the AI and Automation Age appeared first on HR Daily Advisor.