In fact, about half of baby boomers and nearly four in 10 Gen X workers expect to work, or already are working, past age 70 or do not plan to retire, according to new research out this week from nonprofit Transamerica Center for Retirement Studies (TCRS) in collaboration with Transamerica Institute.

The findings highlight the precarious financial position workers are in—as well as the opportunity employers and HR leaders have in front of them to help employees turn things around.

It’s not to say that workers aren’t trying to prepare or aren’t concerned about retirement savings: 56% of workers cite saving for retirement as a financial priority, according to the research. But there are several trends working against them, according to TCRS, including the pandemic and “navigating megatrends such as population aging, increases in longevity, workforce disruptors and concerns about Social Security,” says Catherine Collinson, CEO and president of Transamerica Institute and TCRS.

Those complications are in addition to soaring inflation, which is driving many employees to cut or decrease retirement contributions as they allocate their paychecks to other expenses.

Related: Inflation, market volatility are hurting retirement optimism. What can HR do? 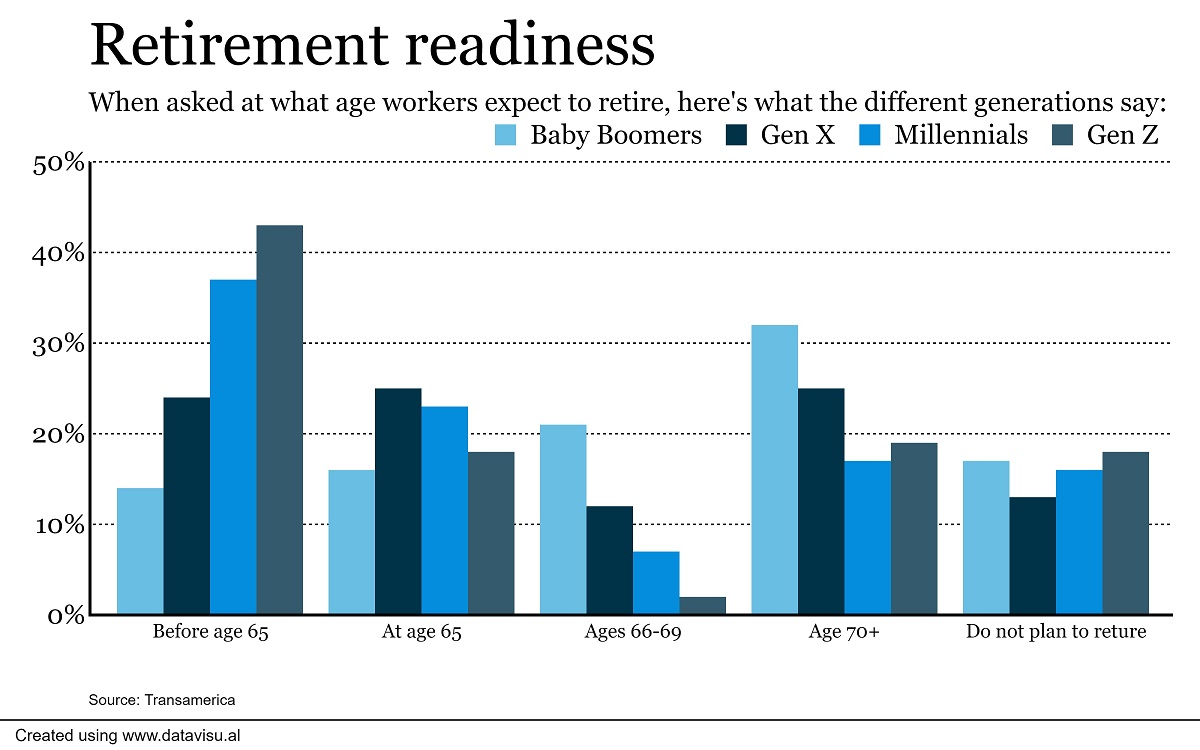 Baby boomers (born 1946 to 1964), for instance, largely started saving at an older age than younger generations and have not experienced the same long-term time horizon to grow their investments, Transamerica reports. Emerging from the pandemic, baby boomers have been susceptible to employment risks, volatility in the financial markets and increasing inflation—all of which are primed to disrupt their retirement plans.

Baby boomers have saved an estimated median of $162,000 in total household retirement accounts but have only $15,000 in emergency savings. A total of 40% of baby boomer workers expect Social Security to be their primary source of retirement income, but still, 83% are saving for retirement in an employer-sponsored 401(k) or similar plan outside the workplace, the study found.

Meanwhile, Gen X workers (those born 1965 to 1980) have saved a median $87,000 in total household retirement accounts but only $5,000 in emergency savings. Thirty-eight percent expect to retire at age 70 or older or do not plan to retire, and 55% plan to work in retirement. And only 27% have a financial strategy for retirement in a written plan.

“Most Generation X workers are saving for retirement, but many may fall short,” Collinson says. “The oldest Generation Xers are now in their late 50s, and the youngest are in their early 40s, so there is no time like the present to build their savings and create long-term financial plans.”

Millennials (those born between 1981 and 1996) entered the workforce around the Great Recession and therefore experienced a turbulent economy in their early working years. They have higher levels of student debt than previous generations and have waited to buy homes, get married and start families. With the increasingly widespread availability of 401(k) plans, they made a solid and early start in saving for retirement, the report finds, and many began saving at age 25.

See also: How optimism about worker finances is presenting HR a ‘great opportunity’

Millennial workers have saved an estimated median of $50,000 in total household retirement accounts but just $3,000 (median) in emergency savings. Three in four millennial workers (76%) are saving for retirement in a 401(k) or similar plan and/or outside the workplace. Those participating in a 401(k) or similar plan contribute 15% (median) of their annual pay.

Generation Z workers (those born between 1997 and 2012) have been especially affected by the pandemic, the report notes, as the majority have experienced one or more negative impacts on their employment, ranging from layoffs and furloughs to reductions in hours and pay. Fifty-one percent say the have trouble making ends meet.

But like millennial workers, many Gen Zers are taking retirement seriously. Sixty-seven percent of Generation Z workers are saving through employer-sponsored 401(k)s or similar retirement plans and/or outside the workplace—and they started saving at the young age of 19. Those participating in a 401(k) or similar plan contribute 20% (median) of their annual pay. Generation Z workers have saved $33,000 (estimated median) in total household retirement accounts but only $2,000 (median) in emergency savings.

The common theme among workers of all generations: They all can do better in their savings, both for retirement and emergency savings—and so can employers. Organizations can help by providing robust retirement and financial benefits, communicating said benefits and encouraging workers to stay the course with their savings—even during turbulent economic times.

“Employers must continue to play a vital societal role by providing jobs, income and benefits to help workers protect their health and finances and facilitate saving and investing for retirement,” Collinson says. “And the private sector must continue innovating products, services and solutions that can help people live, work, save and retire better.”

The post How four generations of workers are faring in retirement savings appeared first on HR Executive.